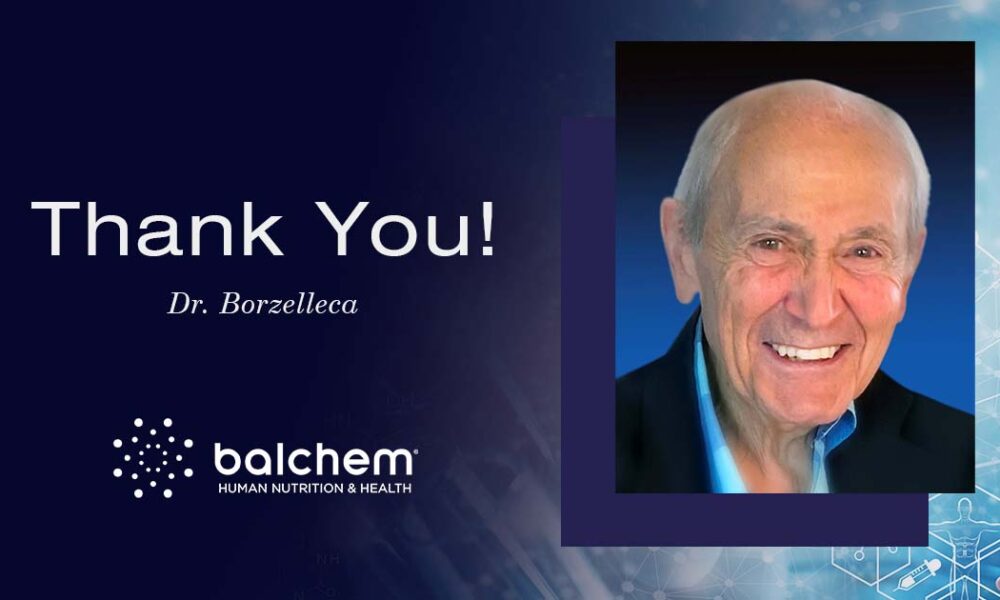 New Hampton, NY (January 25, 2022) Balchem Corporation has recognized the scientific contributions of Dr. Joseph Borzelleca PhD, world-renowned toxicologist, and food safety expert, to the company over the past 25 years by donating $5,000 to Vitamin Angels in his honor.

“I am humbled and honored by this recognition,” noted Dr. Borzelleca when he was informed of the donation recognizing his accomplishments. He continued with the sentiment in great humility indicating he couldn’t accept the honor singularly and asked to share the honor with Jim Hyde, Senior Vice President and General Manager of Balchem Human Nutrition & Health (HNH), Dr. Jonathan Bortz, Vice President of HNH Nutrition Science, and all the exceptional scientists who have or are currently serving on the HNH Scientific Advisory Board.

Borzelleca wrote many of the safety evaluations and self-affirmed GRAS expert panel reports for Balchem products between 1997 and 2021, including Creatine MagnaPower®, Ferrochel®, Meta Mag® Magnesium Bisglycinate, Z-Life® Zinc Bisglycinate, and others.

He received his undergraduate degree from St. Joseph’s University and his MS and PhD degrees from Thomas Jefferson University Medical School. He taught at the Medical College of Pennsylvania, and the Medical College of Virginia. He has published extensively in scientific journals, and managed safety evaluations and GRAS expert panels for several of the nutraceutical industry’s leading suppliers.

“Balchem is honored to recognize Dr. Borzelleca’s years of service with this contribution to Vitamin Angels in order to make a difference in the world, as has he,” said Jonathan Bortz, M.D. vice president, nutrition science, Balchem.

In 2018, Balchem partnered with Vitamin Angels, a global public health nonprofit that distributes life changing vitamins and minerals to women and children in need around the world.  Since the beginning of our partnership, Balchem has helped reached over 200,000 women and children at risk of nutrient deficiencies in 65 countries across the world.