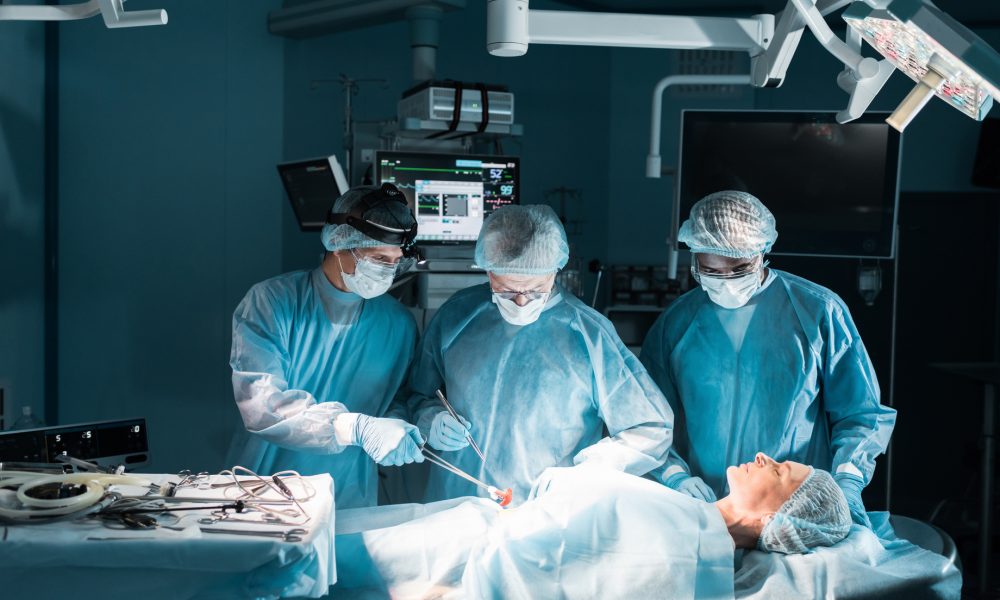 Bariatric Surgery in the U.S.

The market surrounding weight loss is one of the largest in the U.S. and other industrialized nations. Millions of people turn to diet, exercise, nutritional supplements, and pharmaceuticals to help in their fight against obesity. According to the US Center for Disease Control, morbid obesity (people who are at least 100 pounds over their ideal body weight) is the cause for over 500,000 deaths per year in the USA.

For people who are morbidly obese and have tried diet and exercise and other weight loss programs, bariatric surgery may be a last resort to sustain weight loss and resolve health conditions. Long term studies have shown that these bariatric surgeries can cause significant long-term weight loss, recovery from diabetes, improvement in cardiovascular risk factors, and a reduction in mortality by a rate of 43%.

Of course, the intent of any of the forms of bariatric surgery is to cause a significant and sustained decrease in body weight. However, along with all this good can come some potential negative outcomes. There has been much research on the aftermath of bariatric surgery. It has been commonly found that bariatric surgical procedures can lead to a wide range of nutrient deficiencies.

It would appear that certain types of bariatric surgery can impart a greater degree of nutrient deficiencies than others. Does the combination procedure cause more nutritional problems than the restrictive? Is the one that causes more deficiency problems also the one that is most effective for weight loss? In our next installment, we will look at abstracts from a few of the many clinical reports on the nutrient deficiencies associated with bariatric surgery.

Bariatric surgery, or weight loss surgery, includes a select variety of procedures. Bariatric surgery alters the digestive process. There are basically two types of bariatric surgery in practice today: restrictive and combined. The restrictive surgeries are those that limit food intake by narrowing the passage from the upper part of the stomach to the lower part; known as lap band surgery, lap banding, or gastric banding.

The restrictive methods physically limit the quantity of food intake, but do not interfere with digestion. The combined operations (the most common used forms) physically restrict the amount of food intake, as well as the amount of nutrition that can be absorbed. The U.S. National Institute of Health recommends bariatric surgery for obese people with a body mass index (BMI) of at least 40, and for people with a BMI of 35 with serious coexisting medical conditions, such as diabetes.

The restrictive bariatric surgical method reduces the amount of food that one can ingest to one ounce per meal (possibly 2-3 ounces after months of stretching), while the combination methods reduce the amount of food one can ingest and also limit the surface area for nutrient absorption resulting in major nutritional consequences. In the figures shown, the drawings represent a combination (figure 1) and a restrictive (figure 2) method for bariatric surgery.

Following are just two abstracts of the many clinical reports on the nutrient deficiencies associated with bariatric surgery.

Origins of and Recognition of Micronutrient Deficiencies  after Gastric Bypass Surgery

Roux-en-Y gastric bypass excludes the duodenum and proximal jejunum, however these sites are where iron and zinc are most absorbed. Therefore, they are among the nutrients whose digestive and absorptive process can be impaired after surgery. The aim of the present study was to investigate the iron and zinc plasma response to a tolerance test before and after bariatric surgery. The study was performed at São Paulo University School of Medicine of Ribeirão Preto, Brazil. In a longitudinal paired study, 9 morbidly obese women (body mass index 40 kg/m(2)) underwent an iron and zinc tolerance test before and 3 months after surgery. The iron and zinc levels were determined at 0, 1, 2, 3, and 4 hours after a physiologic unique oral dose. The mineral concentrations in the plasma and 24-hour urine sample were assayed using an atomic absorption spectrophotometer. The anthropometric measurements and 3-day food record were also evaluated. A linear mixed model was used to compare the plasma concentration versus interval after the oral dose, before and after surgery. The pre- and postoperative test results revealed a significantly lower plasma zinc response (P <.01) and a delayed response to iron intake after surgery. The total plasma iron concentration area, during the 4 hours, was not different after surgery (P >.05). The 24-hour urinary iron and zinc excretion did not differ between the pre- and postoperative phases. The present data showed a compromised response to the zinc tolerance test after gastric bypass surgery, suggesting an impaired absorption of zinc. More attention must be devoted to zinc nutritional status after surgery.

The number of people requiring bariatric surgery in the western world is constantly growing. In 1997 the World Health Organization (WHO) defined obesity as a plague and one of the greatest public health hazards of our time. The National Institution of Health (NIH) declared that surgery is the only long-term solution for obesity. Today there are four different types of bariatric surgery. Each variation has different implications on the nutritional status of bariatric surgery patients. Bariatric surgery candidates are at risk of developing vitamin and mineral nutritional deficiencies in the post-operative stage, due to vomiting, decrease in food intake, food intolerance, diminution of gastric secretions, and bypass of absorption area. It is easier and more efficient to treat nutritional deficiencies in the preoperative stage. Therefore, preoperative detection and correction are crucial. Blood tests before surgery to detect and treat nutritional deficiencies are crucial. In the post-operative period, blood tests should be conducted every 3 months in the first year after operation, every six months in the second year and annually thereafter. Multivitamin is recommended to prevent Nutritional deficiencies in all bariatric surgery patients. Furthermore, iron, calcium, Vitamin D and B12 are additionally recommended for Roux-en-Y Gastric Bypass patients. Patients with Biliopancreatic diversion and Duodenal Switch should also take fat soluble vitamins.

The health condition referred to as morbid obesity is defined by its non-responsiveness to diet, exercise, and medical treatment. Surgeries designed to promote weight loss, termed bariatric surgery and typically involving a gastric bypass procedure, have recently been implemented to treat obesity with high success rates. However, long-term sequelae can result in micro-nutrient deficiencies. This review will focus on iron deficiency and its association with obesity and bariatric surgery. Iron deficiency develops after gastric bypass for several reasons including intolerance for red meat, diminished gastric acid secretion, and exclusion of the duodenum from the alimentary tract. Menstruating women, pregnant women, and adolescents may be particularly predisposed toward developing iron deficiency and microcytic anemias after bypass surgery. Preoperative assessment of patients should include a complete hematological workup, including measurement of iron stores. Postoperatively, oral iron prophylaxis and vitamin C in addition to a multivitamin should be prescribed for bypass patients, especially for vulnerable populations. Once iron deficiency has developed, it may prove refractory to oral treatment, and require parenteral iron, blood transfusions, or surgical interventions. Bariatric surgery patients require lifelong follow-up of hematological and iron parameters since iron deficiency and anemia may develop years after surgery.

In this final installment of Bariatric Surgery and Mineral Nutrition, we examine the summary of findings as well as which form of minerals can be best absorbed by post-surgical bariatric patients.

According to a review article by Ammor N, et al. [Rev Med Suiss; 2009; 5(196):676- 9], 98% of patients undergoing gastric bypass develop multiple micronutrient deficiencies. Individuals have been shown to become deficient in the following minerals due to malabsorption after the bariatric surgeries:

According to the study by Salle’, A, et al [Obes Surg. 2010; 20(12):1660-70], concerning 324 morbidly obese patients who had one of three forms of bariatric procedures (gastric bypass, sleeve gastrectomy, or duodenal switch), 42 .5% were zinc deficient at post-surgical month 12. The patients who had the duodenal switch procedure had an incidence of zinc deficiency at month 12 of an astonishing 91.7%.

Research has also shown that premenopausal women undergoing Roux-en-Y gastric bypass can suffer calcium malabsorption that contributes to the development of secondary hyperparathyroidism. Some rarely seen deficiencies are occurring post bariatric surgery. Selenium-deficiency-induced cardiomyopathy has been reported subsequent to bariatric surgery. It has been noted that the nutritional complications of bariatric surgery have been found up to 20 years post-surgery and that these patients  should be under lifelong nutritional follow up.

Mineral deficiencies due to bariatric surgical procedures can be due to the decrease in food volume, decrease in digestive time, lack of sufficient digestive juices, and the bypassing of key mineral absorptive spaces in the upper duodenum seen in some bariatric surgeries.

Given the overall effect that bariatric surgery has on the ability to digest and absorb minerals, trying to correct the associated mineral deficiencies becomes an impossible challenge.

Most minerals, such as the typical salt forms (sulfates, carbonates, citrates, and oxides) require acidification in order to be absorbed. In addition, these types of minerals are absorbed in a very limited space high up in the duodenum. This is the very space that is often bypassed in the combination bariatric form of surgery.

The selection of what form of mineral to use in supplementing the post-bariatric surgical patient is important. In certain forms of bariatric surgery, like the combination form and the duodenal switch, it is even more of a concern.